The Ibanez AS200 Semi Hollow-body is a guitar that requires no introduction. It’s availability spans 40 years and yet could be the holy grail of Ibanez electric guitars. This sounds strange, but it might be the best kept secret from the guitar world & Ibanez enthusiasts.

The AS200 has been referenced extensively in the Ibanez AR2619 and Ibanez ASF180 Hollow-body guitar hands-on reports, as such this article is complete as a continuation of those.

The parallel histories of Jazz music and hollow-body electric guitars have been manifested in the Artstar. The influences of these legendary instruments are immediately apparent with bone nut, ebony fretboard, and Ibanez’s signature Super 58 custom pickups. The critical eye will appreciate the details like the smoothness of the fretboard and a skilled crimping technique generally found on instruments costing twice as much. The Artstar is a pure jazz-box that embodies the continual innovation that is Jazz. – Ibanez.com

END_OF_DOCUMENT_TOKEN_TO_BE_REPLACED

The Ibanez ASF180 is a fully hollow body version of the AS200 semi-hollow body guitar we’ve admired and loved since 1977. The AS200, as mentioned in the AR2619 hands-on-report here began as the #2630 semi-hollow body which in 1979 was renamed the AS200. Of course, these were and still are very much Gibson ES-335 derivatives with subtle improvements by Ibanez. The tri-sound (parallel & coil-split options) neck pickup wiring, ’60s Slim Taper profile neck and ebony fretboard are the notable differences between the Gibson and Ibanez. 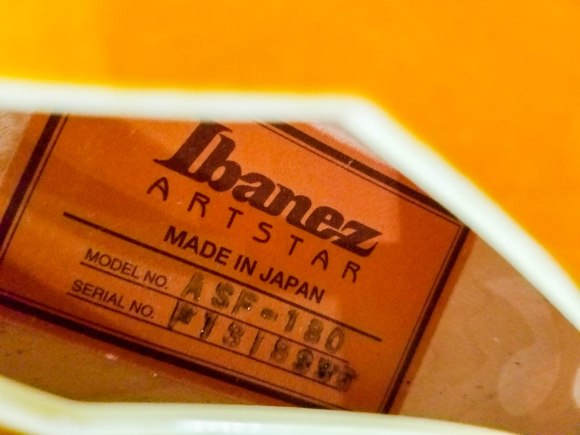 The body construction is the primary difference between the Ibanez AS200 and ASF180 electric guitars. Specifically semi-hollow vs hollow. The hollow-body ASF180 has just a small block of wood directly beneath the bridge for it to attach (the thicker AF200 does not). One large continuous body cavity. The semi-hollows such as AS200 have two distinct cavities seperated by the wood block runnong down the center of the body from the neck under the bridge, tailpiece and beyond. This block adds mass and obviously is used to anchor both the bridge & tailpiece making it semi-hollow. It should also be noted that back in the day before quality potted pickups the semi-hollow body maybe helped eliminate feedback at high volumes.

END_OF_DOCUMENT_TOKEN_TO_BE_REPLACED

Ibanez literature says: “The AR is a classic among Ibanez guitars. It was one of the first original designs produced by Ibanez and continues to be a sought after guitar. The AR series continues that legacy with pride.”

That is all true.

In 1974 Ibanez began to stop being a copy-guitar manufacturer by releasing its first electric guitar with a body shape that didn’t clone another brand’s guitar. The non-clones were the Ibanez Artist #2611, #2612, #2613 and #2614 . Each guitar featured symmetrical double cutaway bodies with carved, contoured tops. The first attempt by Ibanez was legit. These models were work-in-progress with their rounder cutaways, peculiar shaped pickguard and bolt on neck. The Ibanez “Artist Series” were their up-scale electric & acoustic guitars, unnamed and designated by a model number.

Huge first steps with more to come. Ibanez would release another original body design a year later in 1975 called the… wait for it… Artist #2663. This was briefly called the “Flash” (according to “The Ibanez Untold Story”) but we all know & love it as the “Iceman”.

It was impossible to know at the time, but this axe would be the “AR” the guitar world would remember decades later. As Philadelphia Freedom topped the US charts during its Bicentennial, Ibanez created a classic – the AR2619 – perhaps its first historic axe.

END_OF_DOCUMENT_TOKEN_TO_BE_REPLACED

The playing time I have on Ibanez double-locking axes in the last few years can be counted on the minute hand of a clock. Mostly because the ones I still have just aren’t a good fit for me. So I was intrigued when presented with an opportunity to address this… “an Ibanez JS1000BP in great condition with case”. Really intrigued when I saw the price. Along with a few low-res thumbnail photos the only other detail to help clarify was the serial number F07xxxxx. Most notably the year determines the tremolo routing on the body and possible manufacturing defects or oddities that might be present. Ibanez tweaks things sometimes for good and sometimes for other reasons. For example, the neck width at fret-22 and famously the shift from Edge, LoPro, EdgePro then Edge again. Generally speaking it was not a great idea for Ibanez to design a new tremolo to avoid licensing fees without first vetting patent expiration! Since this JS1000 is a 2007 model I knew to expect an EdgePro tremolo without locking studs and 56mm neck width at fret-22.

It’s no secret that after having owned several dozen JEM, UVs & RGs over the years, I moved on from playing these superstrats. Not just because I prefer hardtails for tone, tuning stability, vibrato, intonating bends, simplicity, etc. You can make a JEM/RG/etc. into a hardtail in just a few seconds…  block its tremolo with an insert and pull a rear spring. This allows string pressure to fix the block against the insert against the body wall thus removing all tremolo movement. For a while I did just that… it provides the nicety of having the fine tuners right there at the bridge too. 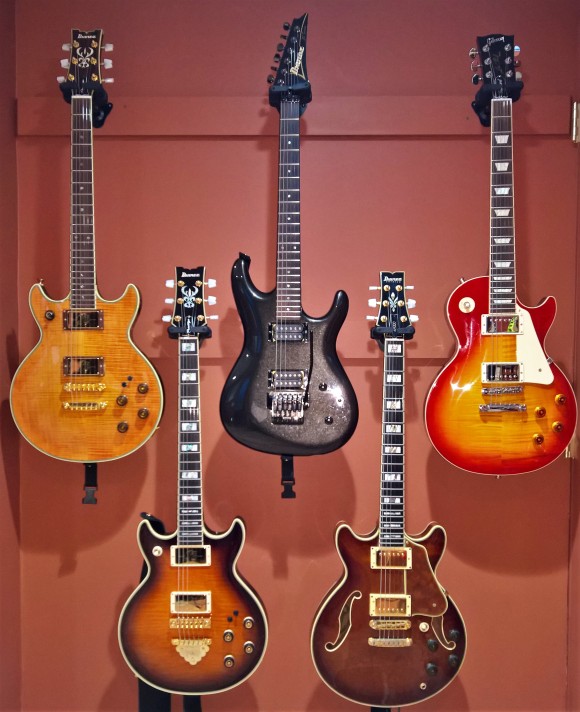 As stated above they’re not a good fit for me. The reasons I moved on from the superstrats are the same ones I’ve encountered (if not labor with) for 3 decades. The same issues many of you might knowingly or unknowingly struggle with today… the fretboard is both too flat (430mm radius) & too wide (43mm nut, 56-58mm at heel) even for size LG hands. I’d call this simply fighting against the instrument or use the analogy of the mechanic using the wrong screwdriver. Combined with the meh ergonomics & relatively “basswood” (blah & muddled) tone at some point you stop and ask yourself the most basic question when you pick up that guitar to play… “why”?